We are not actually brothers. Well, not brothers in the traditional sense. As in we have different mothers, different fathers and although we are both from New Zealand and probably share a distant relative somewhere: We are not actual, literal brothers or blood relatives of any sort (which we know about).

But the thing is, Concrete Brothers WAS born out of a desire to create a business which didn’t just feel like we worked WITH family, but worked FOR family, too,

As in, every job we do is just as important as if were doing it for our mum. Well, one of our mums. Because as we established earlier, we don’t have the same mum.

Where were we? Oh yeah. So Concrete Brothers is run by us, Ben and Louis. We are both born and raised in Canterbury and met in the mid-2000s when we were starting out in our concrete careers.

We worked together for 5 years, and got on so well we even lived together for a bit before Ben moved to Bondi for a few more years. In those days we used to always dream up a future where we worked for ourselves, with each other, and in our own company.

And it was about 18-months after the Canterbury Earthquakes hit this all came to fruition.

Well, after Louis finally managed to entice Ben back from the Beach Road Hotel in Bondi, that was. You’re probably wondering how he did that, aren’t you? Simple. He just took him along to buy a new tipper, threw in some convincing chat about the local market opportunities – and Ben was as sold as what then became our first truck.

At the time, we saw a lot of existing companies focussing solely on earthquake repair work, despite a growing need for quality concrete in all the new developments. If we could get into those neglected new developments, we reckoned that was not a bad long term plan once all the insurance repair work dried up, either.

At the beginning, we started small. With one truck (mentioned earlier), some hurriedly-embroidered shirts, a little bit of luck, and a race to find all the equipment we needed; we were able to secure our first contract together in 2012. It was for 50 new driveways in Wigram – and we never looked back.

From there, we have grown our fleet, our team, our skills, and our business acumen to proudly call Concrete Brothers our own family business. 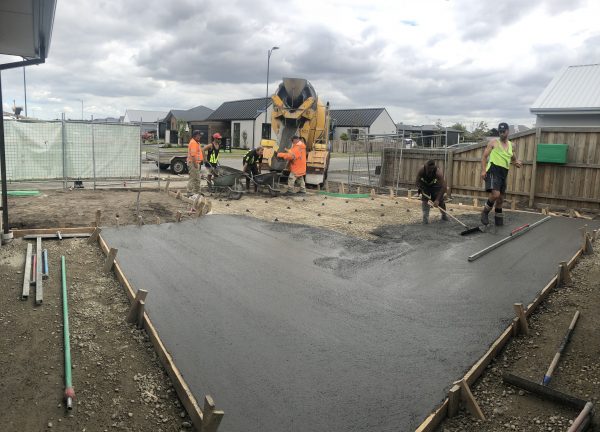 We pride ourselves on solving customers’ problems with innovation and sleek designs, and ensure we are always on top of the game.

About concrete, earthworks or landscaping...

Thanks for you enquiry, we will call you to confirm your appointment time within 24 hours.